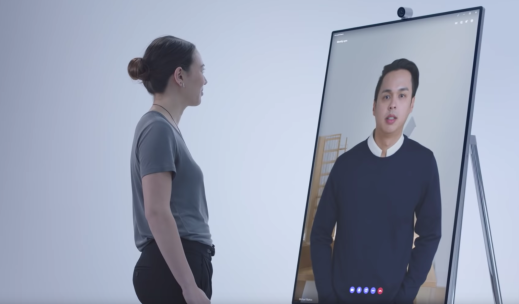 I don’t run a lot of Microsoft product anymore, switched to mac when the intel chip landed + Apple moved to a unix underpinning. That said, I have seen much better quality in products coming from Microsoft in the last few years, so maybe they deserve a second look.

Surface Hub 2 sort of reminds me of a product called Perch, built a by a local Vancouver team which was meant to serve as a portal into disparate global offices. Perch was way before it’s time. WebRTC was still in its infancy and personal device video conferencing had not really crossed the chasm, which is a shame considering where we are today.

Now there are many of video conferencing companies and products, and plenty of alternatives / platforms for developers to build on. It certainly seems plausible now that we could see the Microsoft Surface Hub 2 in boardrooms across the globe. Apparently it will be interoperable with WebRTC endpoints as well, which could make this a powerful work tool indeed. That would enable collaboration with peers over IP on various endpoints including laptops, tablets and mobile, regardless of the OS. Sharing product ideas, riffing on concepts and polishing final features on a product release using the Microsoft Surface Hub 2 as a tool, could be a refreshing new way to work.

It will be interesting to see what developments come about from the Microsoft press event in NYC in April, as reported by The Verge.

WebRTC Ships in MacOS and iOS 11

Looks like VP8 is not there after all, bummer. More political jostling afoot, which sucks for the development community.

This is a big deal, to have Apple / Safari onboard is really the final major obstacle in the adoption of this awesome standard.

More info (thanks Marc Abrams !!)…
Based on the beta for macOS High Sierra – that was made available yesterday…
– https://cl.ly/3q0p1O3…­
– Test samples: webrtc.github.io/samples/ (It passed most of the tests)
– Video codec support is VP8 and H.264 (I have not seen a test that shows H.265 or HEVC but I know it’s there)
– Audio codec support is Opus, ISAC16, G.722 and PCMU
– Basic datachannel support is there but none of the tests seem to work

AWESOME!!! This took a bit longer that many of us were expecting, but hey better late than never!

Next week I will be joining friends old and new at PulverHWC to rediscover – How We Communicate.

Here is an email from Jeff Pulver inviting all of you to join us in Los Gatos for what is sure to be a landmark occasion.

Hope to see you there!

The Keys to the Communications Universe

Next week I return to doing the one thing that I love best – bringing together brilliant, interesting people.

Leaders, visionaries, dreamers and market makers from the worldwide communications industry have accepted my invitation to take part in the Pulver HWC Summit, May 18 – 19 at Testarossa Winery in Los Gatos, CA. I am grateful for both the people who are speaking and the tech legends who have signed up to join us for an intimate conversation. I believe understanding the message behind “How We Communicate” (“HWC”) is the next great area of growth in the communications space. Trillions of dollars of opportunity will be created and there are relationships to be forged, deals to be made, and knowledge to be shared.

There are a limited number of tickets still for sale. To join the conversation and to register, please click here. I would appreciate it if you could share this email with your friends and family involved in the communications industry.

Last Thursday we had the first virtual w3c webrtc wg interim meeting. Once we sorted out a few technical details it went quite well!

We have an immediate WebRTC development contract opportunity that has just come up in the Seattle area. The contract requires 4-5 full-time developers onsite, remote will not fit the bill on this one.

For this contract we are looking for a team lead, 2 x Node.js, 2 x common JS developers

You have built commercial web applications using WebRTC libraries and are intimately familiar with the WebRTC and ORTC specs and respective libraries.

If you are interested please forward your resume elagerway@gmail.com

Bernard Aboba (Microsoft) has now been appointed as editor.

Bernard’s attention to detail and advocacy for transparency, fairness and community has been refreshing. It has been my pleasure (as chair of the W3C ORTC CG) to work with Bernard whom also is an author in the W3C ORTC CG alongside Justin Uberti and Robin Raymond (editor). I look forward to working more with him in the WG.