WebRTC Ships in MacOS and iOS 11

Looks like VP8 is not there after all, bummer. More political jostling afoot, which sucks for the development community.

This is a big deal, to have Apple / Safari onboard is really the final major obstacle in the adoption of this awesome standard.

More info (thanks Marc Abrams !!)…
Based on the beta for macOS High Sierra – that was made available yesterday…
– https://cl.ly/3q0p1O3…­
– Test samples: webrtc.github.io/samples/ (It passed most of the tests)
– Video codec support is VP8 and H.264 (I have not seen a test that shows H.265 or HEVC but I know it’s there)
– Audio codec support is Opus, ISAC16, G.722 and PCMU
– Basic datachannel support is there but none of the tests seem to work

AWESOME!!! This took a bit longer that many of us were expecting, but hey better late than never! 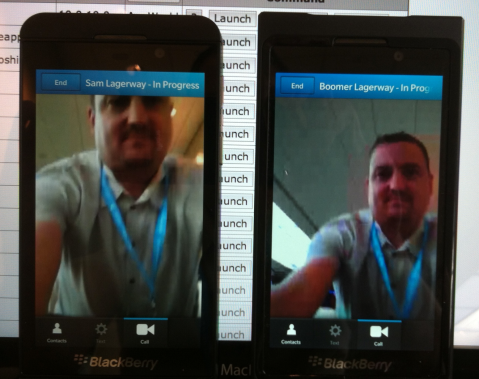 The WebRTC media stack has been ported to QNX / Blackberry 10 as reported hy Hookflash in this Press Release below.

This does not mean that WebRTC browsers will now begin communicating with Blackberry apps written using the Open Peer SDK, well… not today anyhow.  What it does mean is Blackberry 10 developers can write apps using this new SDK to enable P2P voice, video and messaging, across Blackberry and iOS platforms using their own user identity model or mashed up with social identities.

In the sample app (pictured above) running on a production Z10 and a Alpha Z10 device, Facebook was used to map IDs.

Here is the Press Release…

“BlackBerry is committed to our app partners through an open ecosystem, strong platform and commitment to supporting innovation and invention,” said Martyn Mallick, VP of Global Alliances and Business Development at BlackBerry. “We are pleased to have Hookflash bring Open Peer to BlackBerry 10, enabling developers to add rich peer-to-peer communications in their apps, and enhance the customer experience.”

The Open Peer SDK for BlackBerry 10 is the most recent addition to the Open Peer, open source family of real-time P2P communications toolkits. The BlackBerry 10 SDK joins the existing C++ and iOS SDKs already available. Mobile developers creating applications across multiple platforms can now leverage the suite of Open Peer toolkits to deliver real-time P2P communications for all of their applications. The Open Peer SDKs are available in open source and can be found on Github (http://github.com/openpeer/).

Hookflash is a globally distributed software development team building “Open Peer”, new “open” video, voice and messaging specification and software for mobile platforms and web browsers. Open Peer enables important new evolution of communications; Open, for developers and customers to create with. “Over-the-top” via the Internet, where users control their economics and quality of service. “Federated Identity” so users can find and connect without limitations of service provider’s walled gardens and operating systems and “Integrated”, communications as a native function in software and applications. Hookflash founders, lead developers and Advisors previous accomplishments include; creators of the world’s most popular softphones, built audio technology acquired and used in Skype, created technology acquired and open sourced by Google to create WebRTC, and engaged inWebRTC standards development in the IETF and W3C.

Developers can register at (http://hookflash.com/signup) to start using the Open Peer SDK today.

Hookflash enables real-time social, mobile, and WebRTC communications with “Open Peer” for integration of voice, video,  messaging and federated identity into world leading software, enterprise, applications, networks, mobile and computing devices. Hookflash and Open Peer are trademarks of Hookflash Inc. BlackBerry and related trademarks, names and logos are the property of Research In Motion Limited. BlackBerry is not responsible for any third-party products or services. Skype is a trademark of Microsoft. Google is a trademark of Google. Other company and product names may be trademarks of their respective owners.

(full disclosure, I work for Hookflash)

As the go-to browser toolkit, WebKIT has been around for a long time and for the most part this open source project is owned by Apple with large contributions coming from Google ala Chrome.

In reference to WebRTC, Apple is really not saying or doing much around WebRTC (at least not publicly), so it should come as no surprise that Google might feel the need to drive innovation into their new Blink project. Obviously WebRTC is not the only motivating factor here but it seems likely that it played a part.

This is probably a good thing, Blink now provides an alternate solution to WebKIT and will seemingly move quicker with Google driving. It could also create fragmentation, which could (for some) be a bad thing. It also means there there is now another critical component of WebRTC under Google’s control, not saying that is bad, just sayin..

At any rate, it begs the question “Where the heck is Apple?” It would be nice to see this mobile market leader taking more of a leadership role in the development of WebRTC. They have been somewhat more vocal recently around the MTI video codec debate in the IETF but aside from that they have remained relatively silent. One thing seems certain, it will be up to Apple to maintain WebKIT now that Google is focusing on Blink.

I have decided to stop posting Hookflash content here, all of my new Hookflash posts will appear over at Tumblr.

Robert Scoble asked Trent Johnsen to come down to the Rackspace offices in San Francisco to talk about Hookflash. Co-founder – Erik Lagerway came in via Hookflash from North Vancouver for the meeting. The entire video is much longer 😉 We had a great time, thanks Robert!

The net is abuzz! Every blog author, writer and plenty of vendors are seemingly fraught with anticipation as Apple preps for some big announcements today. There is plenty of speculation. Some are saying that Microsoft might even make an appearance to launch Office on the iPad. It wouldn’t be the first time Microsoft and Apple teamed up, Bill Gates has appeared on stage (via video feed at least) with Jobs before.

Hookflash CEO – Trent Johnsen, is in Palo Alto and Mountain View today. This is a good day for Hookflash, the iPad plays a significant role in our world so we are excited to see what Apple has in store. Speaking of which, the online Apple Store has been halted.

We had a great Hookflash shaker last night! Had a blast showing off our new baby with Trent, was such a pleasure spending time with everyone.

So, what’s next you ask?

1 year ago, FaceTime will be OPEN

Anyone else remember this? FaceTime was to be OPEN, that was a year ago. Still nothing. FaceTime uses the open standards, but it is not “OPEN”, meaning nobody else can play along.

How long is it going to take before we see Apple living up to their commitments? Hopefully not long, I for one would love to see a FaceTime (and iMessage) API.

In Canada, and in most enterprises today, RIM holds a firm grasp on the user-base. Blackberry Messenger (BBM) has been one of the features that was specific to RIM devices that their users loved as it saved them SMS fees. Today Apple announced iMessage, a BBM for iOS 5 devices.

An interesting point, neither offer exists across both OSs, eg. iMessage on Blackberry or BBM on iPhone. RIM is potentially in a position to deliver BBM to the iPhone, so what’s holding them back? Will iMessage be the final nail in RIM’s coffin or will RIM counter with a bold move to open up BBM on other platforms?