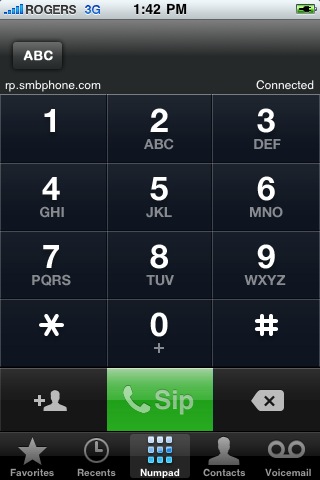 1. Rogers has cornered the GSM market in Canada and is the only carrier to offer the iPhone, but that is about to change. Telus and Bell have tag-teamed to erect an HSPA+ network and will be offering the iPhone as early as next month. Just in time for the holiday season and with plenty of time to ready themselves for the 2010 games in Vancouver.

It’s true that 3G is not yet ubiquitous which mean VoIP over 3G is not something that will drive massive adoption in the near term, but it will be enough of a detractor for a good percentage of the users to not choose Rogers if Telus and Bell allow VoIP over 3G on the iPhone.

2. Rumors have it that Globalive / Wind Mobile is hot on trail of Rogers and will be completing Phase 1 of their network build-out as early as this spring. They too might be carrying the iPhone. None of the big three want to get beat out by the new guy on the block.

3. Other devices on the Rogers network already have apps that deliver VoIP over 3G service. It’s not the network that is the limiting factor here, it’s the Apple app store and the contract they have with the carriers representing the iPhone.

4. Net Neutrality. I am sure that Rogers would like to avoid getting dragged into the same kind of kerfuffle the FCC has been crowing about in the US. The Internet does not stop at the desktop, so why should those it be left out of such conversations, it simply shouldn’t.

It’s should also be clear that Apple would prefer it if the carriers would allow VoIP over 3G. It would mean more devices sold and more interesting apps in the app store. I just can;t see Apple saying “no thanks” to VoIP related (product and service) revenue in the app store.

I think the question is more a matter of ‘when’ as opposed to ‘if’. Hopefully it’s soon!

With the recent rulling on mandatory E911 for providers touching the PSTN Level 3 is leveraging their recent E911 solutions and are filling a gap..

“Since the FCC issued its recent order on E-911 for VoIP, we have seen a significant increase in interest from customers looking for a path to compliance with the FCC’s rapid implementation requirements,” said Sureel Choksi, executive vice president of services for Level 3. “Having deployed extensive E-911 infrastructure over the course of the past eighteen months, Level 3 is in a unique position to assist our customers in meeting the FCC’s requirements, and we believe these enhancements will further extend our leadership position as a network partner for VoIP providers across the industry.”

CRTC looks to be OK with VoIP disruption

The CRTC’s ruling would mean that the large telcos would have to get CRTC approval for their prices, thereby further opening the door for startups, such as Primus Telecommunications Canada Inc. and Vonage Holdings Corp., and cable companies, such as Rogers Communications Inc., Shaw Communications Inc. and Vidéotron Ltée. to pursue the lucrative residential phone market.

Canadian Telcos Attempt to Corral New Competition. What else is new!

Canada’s largest telco Bell Canada is requesting that the CRTC [Canadian Radio-television and Telecommunications Commission] immediately commence a public hearing into the appropriate regulatory framework to govern the offering of services by the next generation of communications companies offering bundles of services.

SaskTel supports the motion as recently made evident by their document submitted to the CRTC on November, 10th.